I've been doing research on how I could create and edit a Google Sheets spreadsheet from my Elixir project but couldn't find anything that would solve my problem.

Hey dear reader 🖖, glad you've fallen in my article, hope it helps you!

In the past weeks, I've been doing research on how I could create and edit a Google Sheets spreadsheet from my Elixir project. Before trying to reinvent the wheel, I searched for dependencies that would have already implemented the features needed. Unfortunately, I couldn't find any that would solve my problem. Well, if there is none, I decided to implement the features from scratch: from implementing an OAuth2.0 access token client, to the creation of a Google Sheets spreadsheet!

Fasten your seat belt, this is going to be a long trip! 🛣️

Do you just want to search for a specific topic on this integration? I got your back 😊. Here's a list of steps with every section of this article.

The first thing we need to do, before hitting the code editor, is to create a project on the google developers console. If you want to use an existing project, make sure you have your project configured as I will show next. 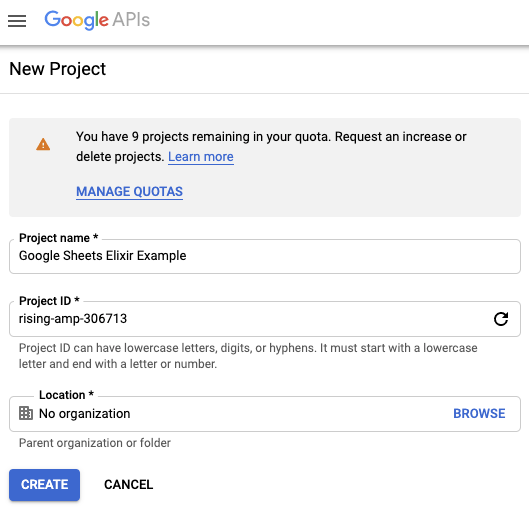 Fill all the fields before creating a project

When we are saying that we are integrating Google APIs with Elixir, that's not entirely true, because Google APIs as a ton of APIs (217 to be exact at the time of this article 😅). What we are doing is giving you the basics (for example, the OAuth2.0 is shareable by more than one API) and an example of one API integration. This will give you the foundations to create an integration for almost every other Google API.

So, for our example project, we will use Google Drive API and Google Sheets API. In order to install both of them onto our project in the google console, first, check if you have the project selected. For that, check if the name of your project appears on the top left corner like this

If so, then click on Enable APIs and Services, search the names of the APIs (drive and sheets), click on the API, and press Enable

Enabling a Google API into the project

First, we need to create an endpoint in our Elixir application to receive the code generated by the consent screen that will be presented the first time we use the API. The endpoint created will be added on the redirect uri field of the OAuth credentials created on the Google Console.

Add consent routing endpoint and the respective controller and view 🚦

On our router.ex we will add this on the api scope.

Then, we create the ConsentController to deal with the request. For now, we will inspect only the parameters and always return status 200, to test if everything is working correctly.

To test if the endpoint is working properly, let's start the server and do a request to it. In my case, I will call localhost:4000/api/consent?test=this_is_a_test_parameter and expect that the IO.inspect(params) prints the request parameters, and the status code 200 is returned with the message {"info": "Consent received with success!"}. 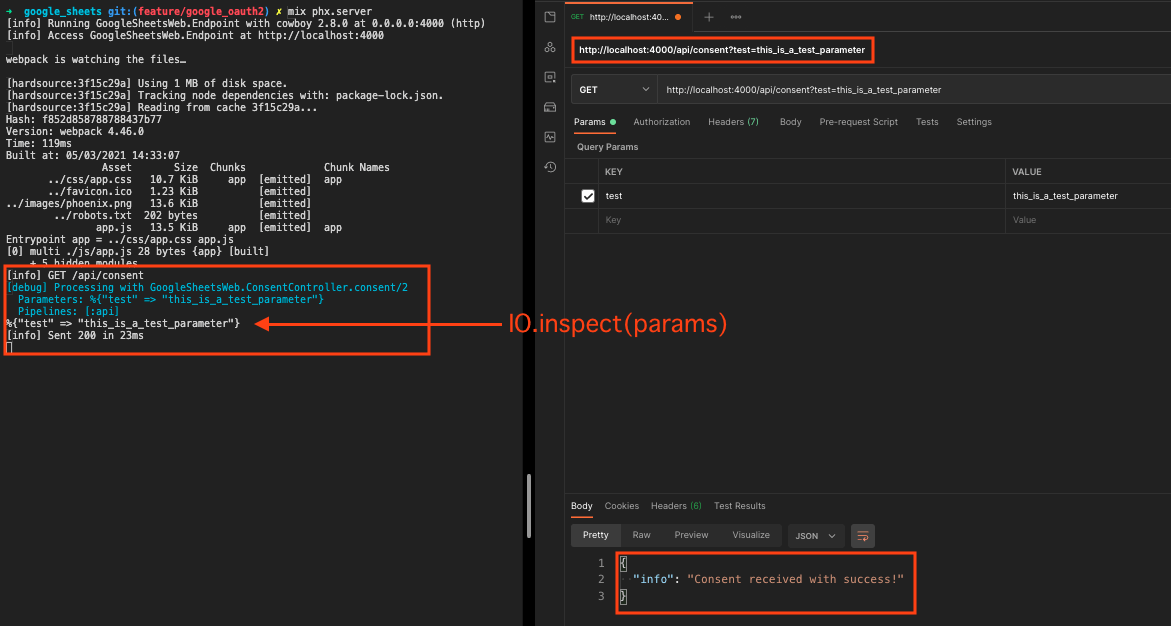 Check if our work until now is working correctly 😅

Having the endpoint created and properly working, let's go back to the Google Console and finish configuring the credentials.

After that, click Create and save both Your Client ID and Your Client Secret because we will need them later! By now, you can close all google console stuff. Once more, kudos 👏! You completed with success all the configuration needed on the Google Console.

Now, it's time to jump into coding, we will now generate and save the access token for later use.

Now we will handle the authentication part of our application. What we will do is generate a consent url that, when we allow a google account, a callback will be sent to the endpoint we previously defined with a code that, when using it to do another API request, will generate us three parameters

Did this explanation got you even more confused? Here's a very simple diagram to help you understand.

Without further a do, let's get our hands dirty. 🔨 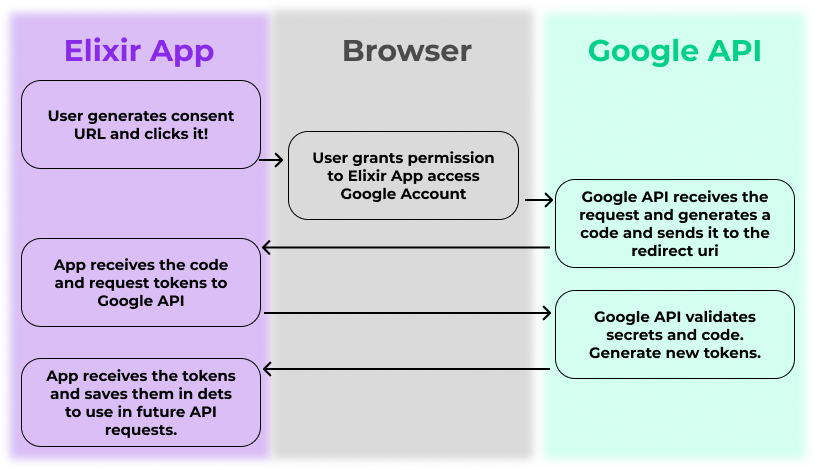 In the root of your project, create an environment file and add the following secrets.

In your config file add a new entry for this new google api secrets. After all of this don't forget to source the newly added secrets.

Feel free to store / handle the secrets with other mechanisms other than the one presented.

The logic of where to get the access token at which stage will be handle here. It will work as follows

With some magic tricks 🧙‍♂️, we transform this logic map into the following elixir function (don't forget to add Timex, Poison, HTTPoison, and Blankable dependencies to the project).

If you want to consult the auxiliary functions to this one, you can access the auth.ex on our example project. In that file, you can find the function save_tokens that will transform the code received from the callback in API call tokens.

By this time I've already changed our consent endpoint controller to the following code (don't forget to add the error view too 🙂).

If until now, you have any doubts or any code changes suggestions you can leave in the comments of the article or in the example project. I will be more than happy to help you! Don't be afraid of doing any question 😌.

Interested in knowing how I save the tokens in dets? You can consult the dets.ex on the example project. To understand how Google API OAuth2.0 works in server-side web apps, I highly recommend consulting google api OAuth2.0 server-side documentation that is super clear. I did the authentication module following their docs!

Before continuing, huge thanks to you for continuing with me on this journey, it's being a long journey but we are almost ending. Kudos to you 👏!

Now, after adding all the authentication code, it's time to see if we can generate with success the access token to do API requests.

The first time we run the function of get_access_token it will return us the following (if you're using environment variables as I've told previously, they will automatically be on the url).

Opening the link, we will be redirected to the consent page. If you are obtaining 'Error 403: access_denied' on the consent page you have to go to your project in the Google Console and in the OAuth Consent Screen tab add your email as a Test User. After you do that, try opening again the consent url and connect with your email. It will prompt you to allow the application to access your Drive. Depending on the scopes you've added in the consent url it can appear you distinct permissions. In my case, I added the scope https://www.googleapis.com/auth/drive that grants the highest permission possible.

After allowing everything prompted, you will be redirected to our elixir application endpoint that will receive the google api code and will generate the tokens used to do API calls. If our request was done with success, our endpoint should return

After this, if we go back and try to obtain the access token from the function get_access_token we get

(For reference I'm running this commands with the server running in IEx mode. If you want to do the same just start the server with iex -S mix phx.server)

And with this, we conclude the Authentication process 🥳! I hope you haven't had too many difficulties so far. Until here, you can use these methods for any type of integration (being Sheets, Docs, any other Google API that uses OAuth2.0 access token 😅) because the authentication method is always the same. Once more, if you have any doubts, please feel free to write in the comments that I will be more than happy to help you. Ready for the funny part? 😊

To create a spreadsheet, we will need these three things:

For our integration, we will create a sheet that, soon after the creation, read and write permissions are given to an email. For that, add a new environmental variable to the project configuration (and, of course, in your environment variables file).

The function responsible for creating a spreadsheet is as follows

How does the create_spreadsheet function works?

This function will create the spreadsheet with the content presented on the builder.ex and, if the sheet is created with success, we grant permissions to the email specified on the config secrets. You can find the other auxiliary functions on the example project. The body of this create sheet request is a huge builder function that creates a map with the content of an Instance of Spreadsheet.

Once again, I highly recommend reading the documentation behind the spreadsheet instance. It will be a little tricky to understand at the beginning because it's a lot of nested maps and lists, but, once you try a bit and make some test sheets you will start understanding. Nonetheless, if you want to check how I approached the body of the sheet check the builder.ex on the example project (I'm avoiding adding to the article since it's a lot of code).

In the end, I use the magic of Poison to encode the map with nested stuff into JSON.

Don't worry, the reward always comes at the end! When we call the function create_spreadsheet we get...

...and then, we go to the google drive of the default_permission_email and.... voilá! 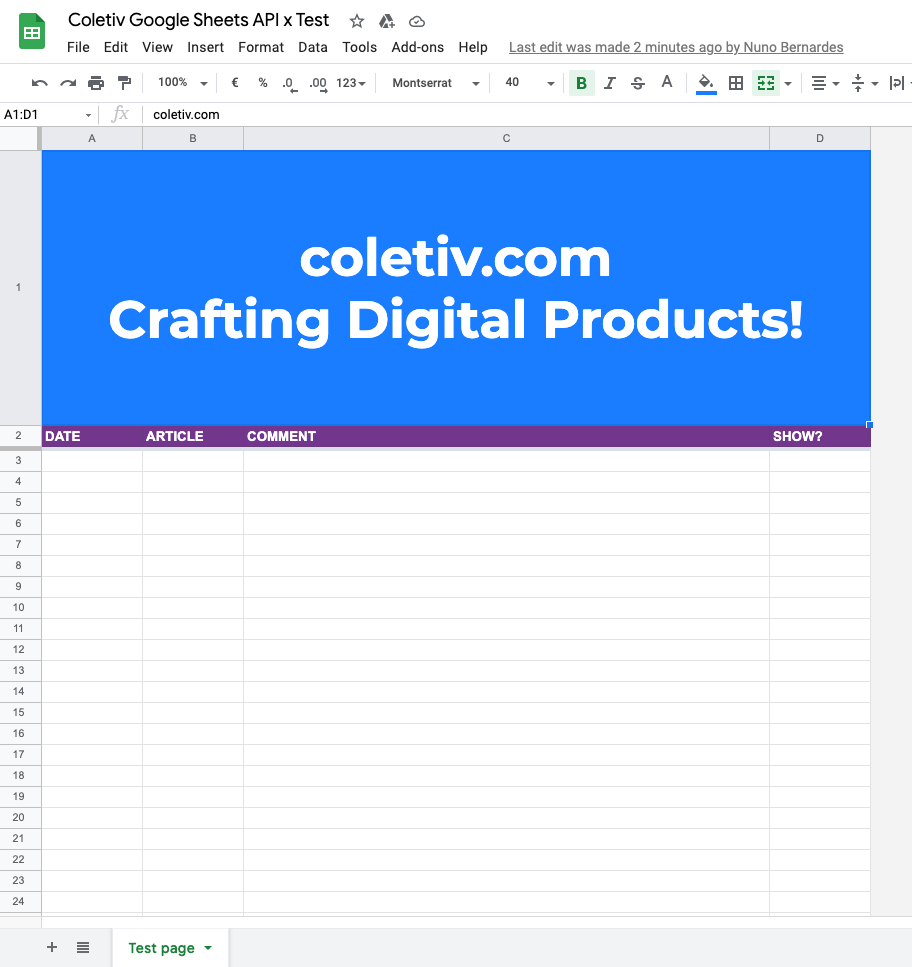 We have just unlocked a number of possibilities together! It was a huge journey until here, I bet you're tired of scrolling, but at the same time with a little bit more knowledge about Google API and Elixir integrated with each other. Hope I've shared with success what I have learned doing this amazing project. Once more, and I can't stop remembering, you can find the example project on Coletiv Github and if you have ANY questions don't be afraid to reach me in the comment section.