It is now time to focus on the more practical aspects of the design and implementation of a proof-of-concept (PoC) using Hyperledger Composer.

This is the second article of a 2-part series, detailing the problems in the supply chain, how blockchain can be applied to fix them, and providing a proof-of-concept implementation example.

This article was written as part of a Master Thesis titled “Supply Chain Management with Blockchain Technologies” which can be accessed here (direct download).

The previous article explained why supply chains may benefit from blockchain and introduced the Composer framework. It is now time to focus on the more practical aspects of the design and implementation of a proof-of-concept (PoC) using Hyperledger Composer.

A. Architecture of a Composer Project

We left the Fabric implementation details out of the way and focused on Composer, which has everything you need to get started.

Our implementation, as simple as it gets, is divided into 4 main parts: 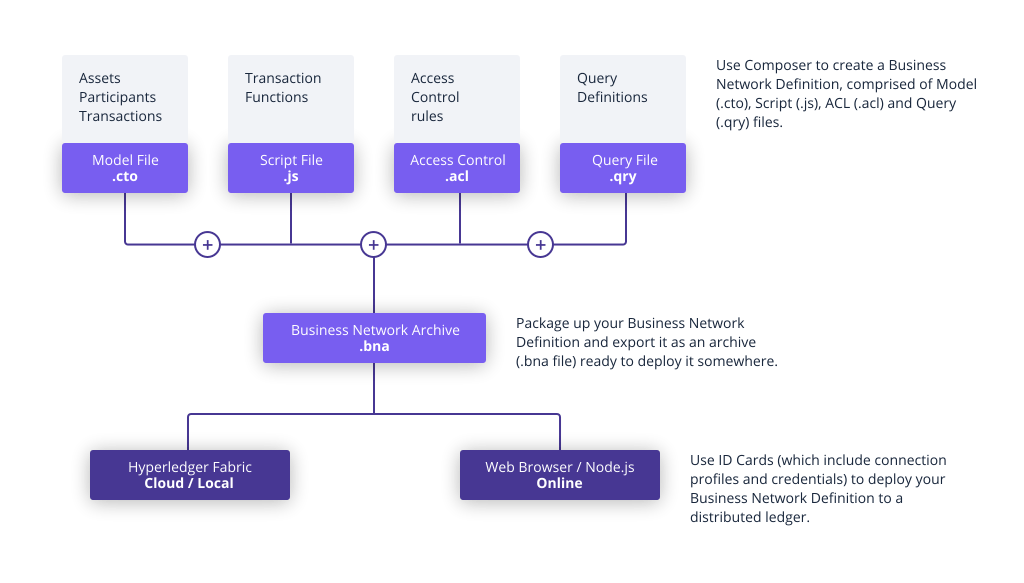 Architecture of a Composer Project

B. Design and Implementation of the PoC

What follows is the proposed design for our system. The aim of such a design is to implement some interesting features and satisfy some of the supply chain requirements, as was mentioned in the previous article:

But we are not only sticking to these general guidelines. This system focuses on information tracking and synchronization, but also on security and finance (to a lesser extent).

The first step towards designing the system was to define who the users are, in order to model the participants. The logical separation for the participant type:

Another integral component of the system are the assets. If traceability of products is to be achieved, these products need to be modeled as assets, so that the network can register which ones exist, their status, and any changes that happen.

The proposed assets in this model were:

A lot of transactions were defined, so if you want to check them all out, it is better if you read the corresponding section of the thesis (6.3.1) or check out the project at Github.

The first part of the defined transactions were the CRUD transactions. Some are already defined by default by Composer, but they can always be overwritten. In this project, we felt the need to define some custom CRUD transactions, such as deleting or updating a commodity, as well as updating a shipment.

The reason for defining these was to later make the definition of the access control rules a lot easier.

The above transaction is an example taken from the PoC, which defines that, when updating a shipment, a status, a new location, a message and, optionally, a new holder for the shipment must be defined.

Other custom transactions included, for instance, the creation of shipments and contracts, reporting damaged goods, transforming commodities and temperature readings. These are all important features that could be used in a real system.

A quick recap: both participants and assets are modeled as objects (just like in OO programming) and have their own registries, where they are stored.

Transactions are different, in that, even thought they are also modeled as objects, their registry is immutable. The modeled transactions are actually a way of representing the invocation of the transactional scripts with certain parameters. These scripts will play around with the participant and asset registries, to alter the data in a meaningful way (for instance, we could invoke a transaction that would alter the status of a commodity). 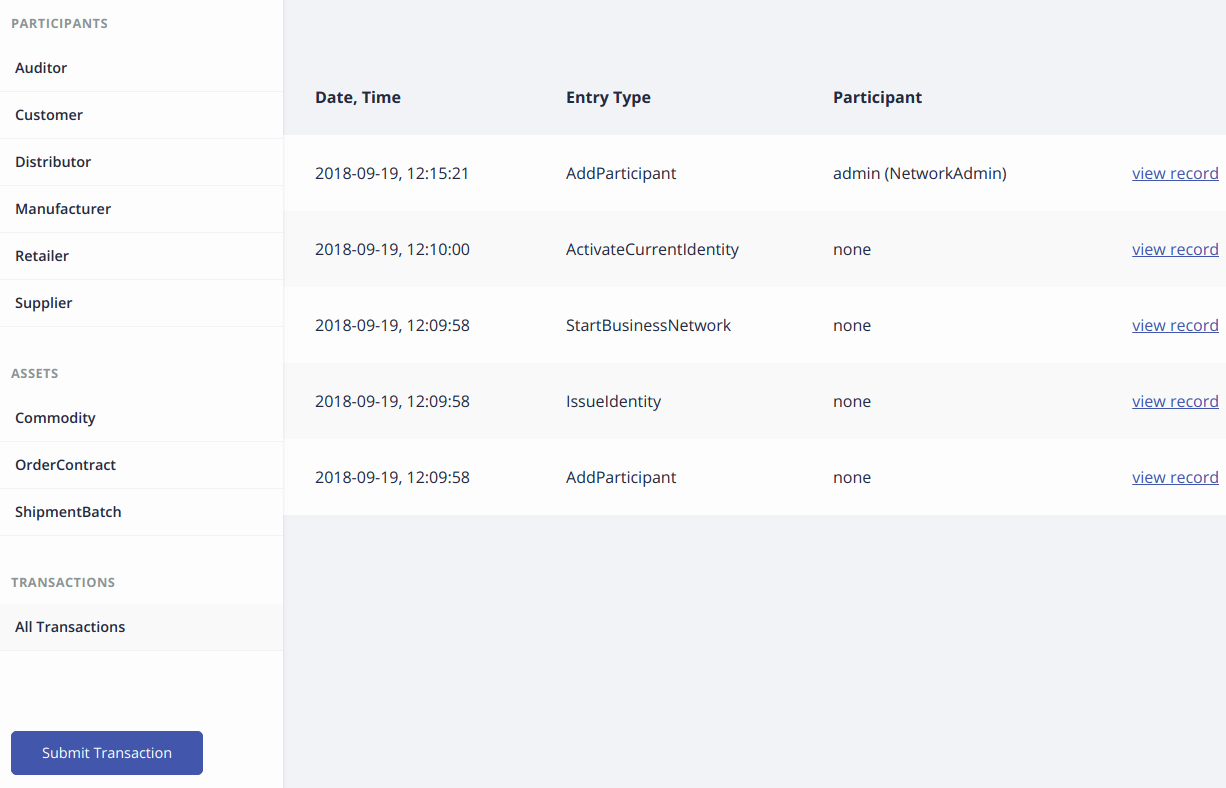 Therefore, every single transaction model object has a transactional script associated. There are 2 parts involved in invoking a script:

2. Calling the transaction — Upon specifying the parameters and pressing submit, the script that is connected to the transaction model will execute. The UpdateShipment script takes as arguments the data fields previously inserted and runs the coded logic: checking whether the new holder field was filled, checking if that holder is registered in the blockchain, checking if the shipment is registered in the blockchain and finally, updating the shipment object with the relevant data inserted. 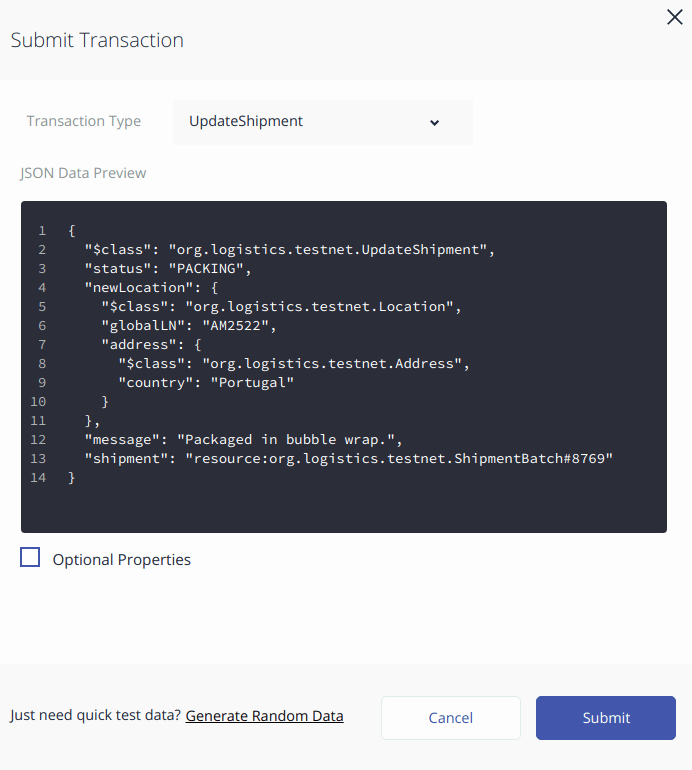 There were a lot of transaction objects modeled, and each one has a script, there are also a lot of scripts. As such, an extensive description of what each script does would be overly complicated. If you want to check them all out, it is better if you check out the project at Github.

Composer has predefined access points to query the basic information about participants, assets and transactions. Anything else requires custom queries defined in a file.

As it uses non-relational databases, Composer has a custom query language, similar to SQL, but with some limitations. The queries are pretty straight forward to code. They are a basic SELECT type of query, with the specification of what object we want to select, followed by a WHERE kind of statement, where certain conditions like equality, inequality, CONTAINS among a few others can be used.

Some queries were defined, but for a real system, a lot more custom queries would have to be written. The following were the most useful and straight forward queries that the system needed.

Since the DB is non-relational, retrieving associated data is not directly possible. Imagine the following situation: you have a commodity which references a participant (the owner of the commodity). Normally, in a relational DB, with the Commodity table having a reference to the Participant table, it would be possible to join both tables and retrieve a participant associated with a commodity in 1 step. 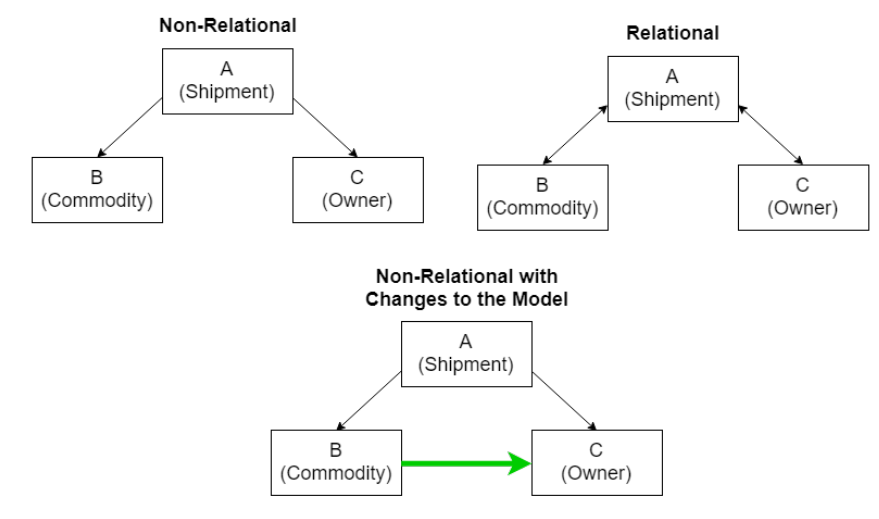 A second major problem is demonstrated in the above image. A non-relational DB leads the references to be unidirectional, instead of bi-directional like in a relational DB.

Originally, the shipment had a commodity and an owner. The shipment’s owner, logically, should also be the owner of the commodity. However, having a unidirectional connection, it was impossible to link the Commodity to the Owner. In order to do this, it was necessary to purposefully alter the model and add the owner reference in the commodity object (represented by the green arrow).

Certain queries will be impossible to write, unless you adapt your model specifically for it!

The access control rules include a set of rules defined for CRUD actions:

Defining a small PoC with the basic functionalities is not hard at all with Composer, although we could find a few topics that could be improved in the future: